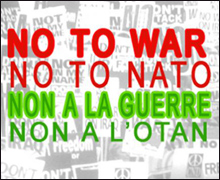 From April 3 to 5, 40 heads of state and government leaders, including U.S. President Barack Obama, will come to Strasbourg and Baden-Baden to celebrate the 60th anniversary of the NATO alliance.

Opponents of NATO from 80 countries are preparing a counter summit and are holding a unique conference this weekend at Strasbourg University to plan strategy. The coalition of 500 associations, known as the Strasbourg Collective, claims the right to demonstrate in the centre of the city. The French government is determined to stop them. Nothing is to be allowed that could threaten the security or the dignity of the occasion. A secure ‘red zone’ is planned to cover a large part of greater Strasbourg.

On the surface all is sweetness and light. On each side of the Rhine a village is to be set up for protesters with the help of the local authorities. The Prefect responsible for security talks of his concern for the “democratic right to dissent under the laws of the Republic” and the leaders of the Collectif de Strasbourg say they are grateful. However, when it comes to actually being allowed to parade through the centre of the City, or anywhere near to it, the gloves come off. The Prefect’s latest communiqué is crystal clear:

“In order to preserve the City of Strasbourg from the exactions, violence and damage which is regularly observed in the fringes of this type of demonstration, the Prefecture has told the organisers of the counter summit that all demonstrations in the centre will be banned on this occasion.”

Co-organiser Frédéric Henry replies, “There is no question of ruining Strasbourg, but NATO cannot claim to occupy a town if we cannot do the same”.

A huge security operation is gradually being unveiled involving thousands of police and military. No one knows how many but estimates vary from 12,000 to a massive 45,000. The whole of greater Strasbourg is to be locked down.