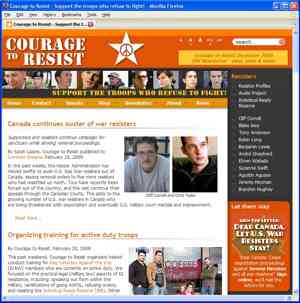 In the past weeks, the Harper Administration has moved swiftly to push U.S. Iraq War resisters out of Canada, issuing removal orders to five more resisters who had resettled up north. Two have recently been forced out of the country, and the rest continue their appeals through the Canadian Courts. This adds to the growing number of U.S. war resisters in Canada who are being threatened with deportation and eventually U.S. military court martials and imprisonment.

“According to the Nuremberg principles, people have the right to a free conscience,” said Ryan Johnson, a former soldier who refused deployment to Iraq and resettled in Canada in June 2005. “We should be allowed to stay based on that.”

Since the beginning of the Iraq War, dozens of U.S. troops resisting service in Iraq have applied for refugee status in Canada, on the grounds that, were they handed back to U.S. military custody, they would face persecution for refusing to participate in an illegal war. Several Afghanistan War resisters have also made Canada their home, with an estimated 200 U.S. war resisters currently residing in that country.

Cliff Cornell, who resettled in Canada after refusing to deploy to Iraq in 2005, returned to the United States when the Canadian government denied him a stay of removal. He was arrested by U.S. border police last week and taken to a county jail in Bellingham, Washington. Following a community vigil at the jail, Cornell was released and given five days to travel to Ft. Stewart, Georgia on his own accord. He is expected to face court martial, and supporters have set up a defense fund to cover his legal fees.

The 28 year-old from Mountain Home, Arkansas refused to go to war because “it just didn’t feel right,” he told his supporters at a 2005 rally in Canada. “I don’t want to be killing innocent people.”

Chris Teske, a former U.S. Army paratrooper and infantryman who refused recall to Iraq after serving two tours in Afghanistan, also left to the United States after receiving removal orders. Teske was not arrested crossing the border and is currently consulting legal counsel to turn himself in. 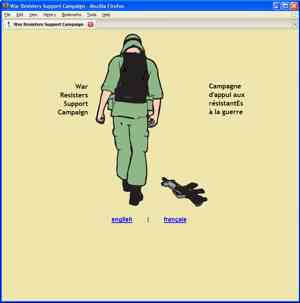 “It seems as hard as I try to forget the institution which enslaved me, they have not forgotten about me,” Teske said in a January 2009 statement. “I have been denied at every turn in my immigration process. I have now been ordered to leave Canada.”

Three other resisters-Kimberly Rivera, Patrick Hart, and Dean Walcott-were issued deportation proceedings in recent weeks, which they appealed through the Canadian judicial system. They have won temporary stays, which will likely delay deportation a few months and could possibly lead to successful appeals.

Several more war resisters-including Jeremy Hinzman, Joshua Key, and Matt Lowell-have been fighting deportation orders for months and have thus far avoided deportation. In a remarkable legal victory, a Federal Court in Canada rejected the reasons given by the Immigration and Refugee Board for denying refugee status to Joshua Key and ordered a new hearing. Hinzman, who arrived in Canada with his wife and son over five years ago, will have an appeal hearing on February tenth. Last year his wife Nga gave birth to a baby girl, who is a Canadian citizen.