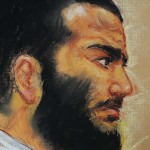 GUANTANAMO BAY, CUBA–A report provided by a U.S. soldier casts doubt once more on the Pentagon’s assertion that Canadian captive Omar Khadr threw a grenade that killed an American soldier.

A military court was told for the first time yesterday that Khadr, then 15, was buried under rubble from a collapsed roof before he was captured, which would suggest he could not have thrown the grenade.

A witness identified as Soldier No. 2 was said to have accidentally stepped on Khadr because he did not see him under the rubble.

The soldier “thought he was standing on a `trap door’ because the ground did not seem solid,” stated a motion submitted by Khadr’s defence lawyers.

He then “bent down to move the brush away to see what was beneath him and discovered that he was standing on a person; and that Mr. Khadr appeared to be `acting dead,'” the motion continued.

That new version of what happened in Afghanistan on July 27, 2002, conflicts with reports from other soldiers who said Khadr was sitting up and conscious when he was shot twice in the back.

← The libertarian case against the war in Afghanistan
Total Defeat for U.S. in Iraq →