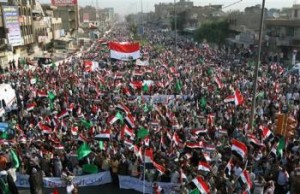 Thousands of followers of Shiite cleric Muqtada al-Sadr take part in a rally in Baghdad, Iraq, on Saturday, Oct. 18, 2008, to protest a draft U.S.-Iraqi security agreement. The mass show of opposition comes as the United States and Iraqi leaders try to build support for the accord that would extend the presence of American forces in Iraq beyond the end of this year. (AP Photo/Hadi Mizban)

An interview with Iraq correspondent Patrick Cockburn and Iraqi blogger Raed Jarrar on the Status of Forces Agreement.

But tens of thousands of Iraqis demonstrated against the proposed Status of Forces Agreement, or SOFA, on Saturday.

Critics have dismissed the provision, because U.S. troops seldom leave their bases in Iraq unless on authorized missions. Iraqi and U.S. negotiators are hoping to finalize the agreement before a UN mandate expires this year.

Patrick Cockburn is the Middle East correspondent for the London Independent. He has covered Iraq for many years. He is just back from Iraq. He’s the author of several books. His latest is called Muqtada: Muqtada al-Sadr, the Shia Revival, and the Struggle for Iraq. He just returned from Iraq. He joins me here in the firehouse studio.

We’re also joined by Raed Jarrar, an Iraqi blogger and analyst, consultant to the American Friends Service Committee’s Iraq program. He translated a leaked version of the proposed agreement, available on his website, raedinthemiddle.blogspot.com, joining us from Washington.

← Afghanistan: 20 Million People Under the Poverty Line
War or Peace? The World After the 2008 U.S. Presidential Election →