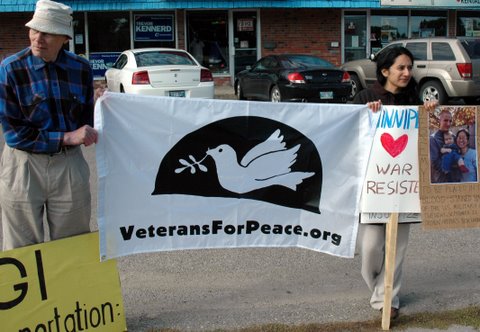 The protestors intend to continue their nonviolent occupation until Hinzman’s deportation, expected Sept. 23, is stayed, or until they are compelled to leave.

Jeremy Hinzman moved to Canada in early 2004 to avoid military service in what he believes is an unjust, unlawful war. His application for refugee status was rejected and he is scheduled to be deported September 23. Organizers fear Hinzman will face a fate similar to that of war resister Robin Long who was deported from earlier this year and subsequently court-martialed and sentenced to 15 months in prison.

Hinzman is one of thirteen American war resisters in whose cases have been championed by the War Resisters Support Campaign.

Canadians have repeatedly expressed their support for Iraq war resisters. On June 3, 2008, a motion was adopted by the House of Commons in favour of allowing resisters to stay in Canada, and calling on the federal government to cease deportation proceedings. A recent poll by Angus Reid found that two-thirds of Canadians support letting US war resisters stay.

Despite this, the federal government has refused to allow war resisters to remain in Canada. This is in sharp contrast to the Vietnam War era during which then Prime Minister Pierre Trudeau declared: “Canada should be a refuge from militarism” and 30,000 to 40,000 war resisters found refuge in Canada.

“The American war on Iraq has caused the deaths of an estimated 1.2 million Iraqis. Refugees number more than 4 million. American war resisters are refusing to participate in these crimes and that is why we are supporting them,” said spokesperson Michael Welch, one of the participants in the sit-in.

Welch added that polls taken in 2008 show that 82 percent of Canadians and 65 percent of Americans oppose the war in Iraq.

What you can do 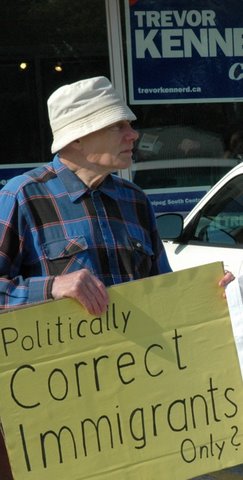 Go to Manitoba Conservative Candidates: Make sure to link to the candidate’s web site for current number. Call them and let them know that peace and human rights are election issues.

Show up at Town Halls and Forums, phone into radio shows. The media are inviting people to submit questions for the October 2nd televised debate. Send your question to question@electiondebate08.ca 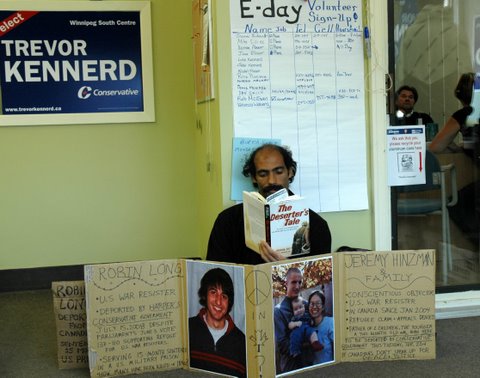