Why is the US government still pouring billions into missile defence?

By George Monbiot. Published in the Guardian 18th August 2008

It’s a novel way to commit suicide. Just as Russia demonstrates what happens to former minions which annoy it, Poland agrees to host a US missile defence base. The Russians, as Poland expected, respond to this proposal by kindly offering to turn the country into a parking lot. This proves that the missile defence system is necessary after all: it will stop the missiles Russia will now aim at Poland, the Czech Republic and the UK in response to, er, their involvement in the missile defence system.

The US government insists that the interceptors, which will be stationed on the Baltic coast, have nothing to do with Russia: their purpose is to defend Europe and the United States against the intercontinental ballistic missiles Iran and North Korea don’t possess. This is why they are being placed in Poland, which, as every geography student in Texas knows, shares a border with both rogue states.

Read more of The Magic Pudding. 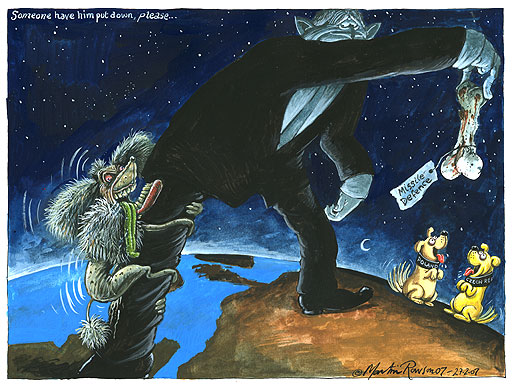