About 80 people participated in Winnipeg’s annual Lanterns for Peace commemoration of the 1945 U.S. nuclear bombings of Hiroshima and Nagasaki. The event was organized by Project Peacemakers, the National Association of Japanese Canadians and Peace Alliance Winnipeg.

Here are some of the sights and sounds of the ceremony, held in Memorial Park, within sight of the Manitoba Legislature. 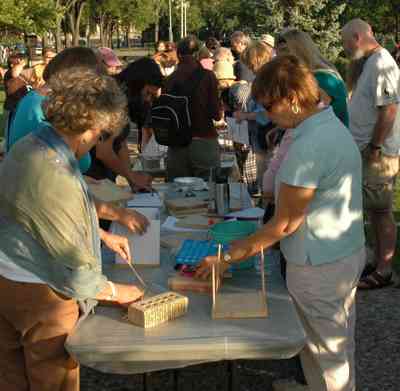 Participants made Lanterns for Peace and origami cranes. The significance of the lanterns and the cranes is explained here, and was the focus of remarks by Terumi Kuwada, secratary of the National Association of Japanese Canadians (see below).

Participants paused in their lantern-making labours to hear from a number of speakers. Click on the red triangle to hear what they said.

Kirsten Freed, Co-ordinator, Project Peacemakers Kirsten Freed served as MC, speaking at various points throughout the evening and keeping things running smoothly. She reminded us that Winnipeg is a member of Mayors for Peace, as  are 2367 other cities in 131 countries world wide. Winnipeg, joined in 2003, is one of seven Canadian members. Clearly, Canadians can do more.

Glenn Michalchuk, Chair, Peace Alliance Winnipeg Glenn Michalchuk read the text of the speech delivered by the Mayor of Hiroshima, Tadatoshi Akiba, earlier that day, calling for “an immediate halt to all efforts, including by nuclear-weapon states, to obtain or deploy nuclear weapons, with a legal ban on all acquisition or use to follow by 2015.

Rob Altemeyer, MLA, Wolseley Rob Altemeyer brought greetings on behalf of the Manitoba government. Reflecting on the government’s support for the “yellow ribbon campaign” he said that “war is a failure of us to resolve our differences” and that he had “mixed feelings” when he looked at the yellow ribbon.

Harvey Smith, Winnipeg City Councilor (Daniel McIntyre) Harvey Smith brought greetings from the City of Winnipeg and said that everyone has a role in ensuring the abolition of nuclear weapons. He encouraged audience members to call their city councilor and insist that they play an ongoing part in this campaign.

Art Miki, Keynote Speaker Speaking as a Citizenship Judge and as past president of the National Association of Japanese Canadians, Art Miki observed that people alive today continue to feel the pain of the Hiroshima and Nagasaki bombings. He said that while remembering is important, we must be mindful of the suffering of millions of refugees today, displaced by racism and war.

Terumi Kuwada, Secretary, National Association of Japanese Canadians Terumi Kuwada explained the significance of the “Lanterns for Peace” ceremony and recounted the “Story of Sadako” — a moving account of a young Japanese girl who died of leukemia caused by radiation from the attack on Hiroshima.

Jason Hirose, Accompanist Jason Hirose played his violin, beautifully and movingly at various points during the evening. His evocative stylings set a tone for the ceremony that was at times sad, hopeful and deeply spiritual. (Regrettably much of the beauty was not captured by our cheap little digital audio recorder.) 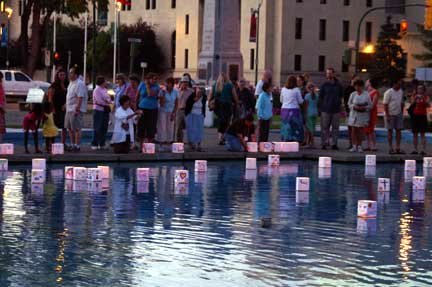 At the conclusion of the evening, to the accompaniment of Jason Hirose, on violin, Winnipeggers launched their lanterns in the fountain at Memorial Park. 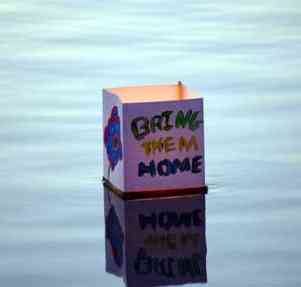 While people were here to commemorate the nuclear devastation of Japanese cities, the current war in Afghanistan, which has claimed the lives of thousands of men, women and children, including those of 88 Canadian soldiers, was on the mind of everyone present.