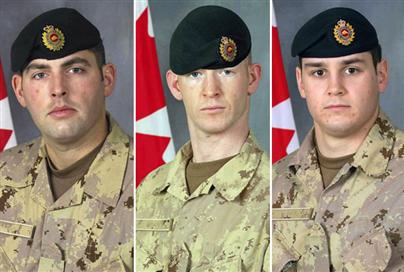 Sgt. Shawn Eades, Cpl. Dustin Roy Robert Joseph Wasden and Sapper Stephan John Stock were killed by an IED on Thursday, August 21, 2008. Their deaths bring to 93 the number of Canadian soldiers killed in Afghanistan. As is their custom, Canada’s political leaders wrapped their corpses in bloody lies and tired platitudes.

“Today, all of Canada mourns the deaths of three brave soldiers killed in the line of duty in Afghanistan,” Prime Minister Stephen Harper said in a statement. “These soldiers made an important contribution to international efforts in Afghanistan aimed at creating the conditions necessary for reconstruction and development efforts to flourish in a country ravaged by decades of war and despotism.”

“Canada and our NATO allies are making a profound difference in the lives of the Afghan people,” Defence Minister Peter MacKay also said in a statement Thursday. “Despite this tragic event, we remain undeterred in our mission to help Afghans rebuild their country.”

What a load of crap! Their deaths will do nothing to repair the ravages of “decades of war and despotism.” If anything, the war will only prolong it.

These soldiers (and the people they kill) are being sacrificed to shore up an irredeemably feudal, reactionary government of warlords and drug runners who are every bit as nasty as the Taliban regime they replaced.

Apologists for the war insist that the NATO forces are making a positive difference in the lives of ordinary Afghans. They remind us that the government of Hamid Karzai was elected, that girls are being allowed to go to school, that life is getting better.

Read some of these stories and explain, please, how Afghan life is improving.