Winnipeggers gathering at the Memorial Park Fountain for a lantern ceremony, joining thousands around the world, 8:00 pm Sunday July 6.

Winnipeg, MB – Approximately 214 000 people died from the two nuclear bombs dropped on the cities of Hiroshima and Nagasaki in 1945. The massive loss of life, the majority of which were civilian, and the nuclear threat the world has lived under since that time will be remembered at the annual Lanterns for Peace ceremony.

After a time where young and old will make Japanese paper lanterns with peace messages, a brief service will be held at 8:45 at the Memorial Park fountains (in front of the Legislative Building), led by Derrick Martens of Project Peacemakers with words by Councillor Harvey Smith, Veterans Against Nuclear Arms member Margaret Maier, and a member of the Japanese-Canadian community. The service will close with the release of the colourful, lighted lanterns in the fountain at sundown. 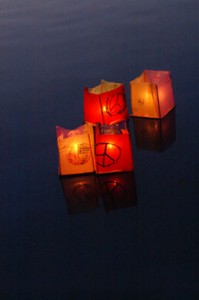 Although the Cold War has ended, we are not seeing large-scale disarmament. In fact, 4000 nuclear missiles in the US and Russia remain aimed at each other on hair-trigger Launch on Warning systems, and are susceptible to accidental warnings and mistaken launches. India and Pakistan, new nuclear states, are welcomed by the world while North Korea and Iran seek nuclear weapon muscle to protect their interests. Britain is seeking to replace its aging nuclear weapon system, while Russia, the US, and China continue to modernize and update their arsenals and systems.

The Nuclear Non-Proliferation Treaty states that all nuclear weapon states have an obligation to disarm, while all non-nuclear weapons states must refrain from acquiring or developing nuclear weapons. This treaty is in jeopardy from both camps.

The Hiroshima-Nagasaki Lanterns for Peace seeks to remember the horrific tragedy of the nuclear weapons used in Japan while pledging to prevent such horrors from happening again. It also seeks to highlight that Winnipeg is a member of Mayors for Peace, a Hiroshima-based organization with over 1400 cities from around the world, including forty from Canada, working to end the nuclear threat, which is largely against cities.

Project Peacemakers is the local chapter of Project Ploughshares, Canada’s premier disarmament agency, working work with churches and related organizations, as well as governments and non-governmental organizations, in Canada and abroad, to identify, develop, and advance approaches that build peace and prevent war, and promote the peaceful resolution of political conflict. The event is co-sponsored by Peace Alliance Winnipeg, formerly No War Coalition (Manitoba).