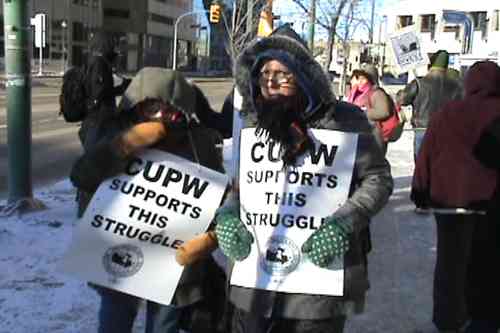 About 50 Winnipeggers braved -20 C temperatures and a biting wind to rally for Freedom for Gaza in front of the Canadian Grain Commission building on Main Street in Winnipeg yesterday.

The rally, organized by Peace Alliance Winnipeg, Canadian Muslims for Palestine and the Canada Palestine Support Network, was one of several held in Winnipeg since Jan. 3 that have mobilized hundreds of local citizens.

“Even though the shooting is ended in Gaza, the occupation is still on. So we’re calling for freedom for Gaza and an end to the occupation,” said rally spokesperson, Bassam Hozaima. 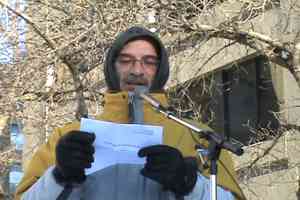 Bob Tyre, President of the Winnipeg Local of the Canadian Union of Postal Workers, read a letter from CUPW National President Denis Lemelin to Prime Minister Stephen Harper, which said, in part:

“. . . as a longer term strategy, the Canadian Union of Postal Workers is asking your government to adopt a program of boycott, divestment, and sanctions until Israel recognizes the right of Palestinian people to self-determination and complies with international law, including the rights of Palestinian refugees to return to their homes as stipulated in UN resolution 194.” 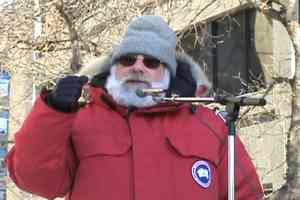 Israeli peace activist and Nobel Peace Prize nominee Jeff Halper, who heads the Israeli Committee Against Home Demolitions, was optimistic about the prospects for a free Palestine.

“I bring you greetings from the critical Israeli peace movement. We had about 10,000 people in the streets of Tel Aviv not long after the beginning of the invasion of Gaza. So, there are people in Israeli, as well, who get it, that are fighting the occupation, who are horrified at the massacres in Gaza, and are raising their voices.

“I think we are making the turn in our struggle. Until now, we were still minority voices. With the invasion of Gaza, Israeli really showed what it is after. It’s not after peace but the invasion of Gaza was really a campaign of pacification to try and pave the way for apartheid – an imposition of an apartheid regime on all of Palestine. And I think now people get it. Not only people on the left, or critical people, but I think the mainstream is starting to get it.

“Millions of people went out all over the world to protest this and still are. I think we have to take heart from that. Sometimes we look at ourselves as small groups of people on s street corner. But we should know that this is becoming a global issue on the scale of the struggle against apartheid in South Africa. So, we’re winning, and I think that people are with us and I hope that soon we’re going to see a free Palestine.”

Halper spoke last night to a capacity crowd of 90 people at the Rudolf Rocker Cultural Centre. For information on other speaking engagements in Winnipeg, go here.