Peace Alliance Winnipeg joined with the Provincial Council of Women of Manitoba, the University Women’s Club of Winnipeg and the Council of Women to host an all-candidates forum in the constituency of Kildonan St-Paul. 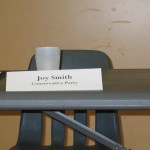 The only candidate to not attend was Joy Smith of the Conservative Party. The absence of Conservative candidates at all-candidates meetings has been something of note in these elections, and of particular frustration to voters who have taken the time to come and hear the views of candidates.

The post 9/11 U.S. invasion of Afghanistan was illegal under international law. The war has cost the lives of at least 100 Canadians (97 soldiers, one diplomat, two aid workers) and several thousand Afghan men, women and children. In 2008, Afghanistan was ranked 176th on a list of 180 countries by Transparency International, making its government one of the most corrupt regimes in the world. A recent survey by the Senlis Council found that “more than 6 out of 10 Afghans want foreign troops to leave.

With these facts in mind, do you support immediate withdrawal of Canadian troops from Afghanistan?”

Only the candidate for the Christian Heritage Party answered in support of the war and stated that the presence of NATO been a positive factor in the stabilization and reconstruction of Afghanistan and the protection of women’s and children’s rights.

The other candidates were unanimous in their condemnation of the war and their view that Canada should not be in Afghanistan. They noted that the war was being fought to secure important oil routes. They drew a connection between the support NATO provided for the corrupt Karzai regime and the flourishing of the drug trade.

Ross Eadie supported the “immediate withdrawal” of Canadian troops. Lesley Hughes said that Canada was really participating in a “war of occupation” and the “selling of the war” to Canadians as a noble effort was part of conditioning Canadians to “go down the road of militarism”. Eduard Hiebert said that Canadians had been made “less secure” by Canada’s war in Afghanistan and that Canada had relinquished its role as peacekeeper. Kevan Bowkett said the Green Party wanted to pull Canada out by next year and that Canada should “shift from military capacity” to building the capacity of the Afghan people.

If anyone thought that the issue of Afghanistan was not one of the key issues people want addressed by the next government the response of the audience demonstrated otherwise. As each of the candidates expressed their opposition to the war they were applauded.