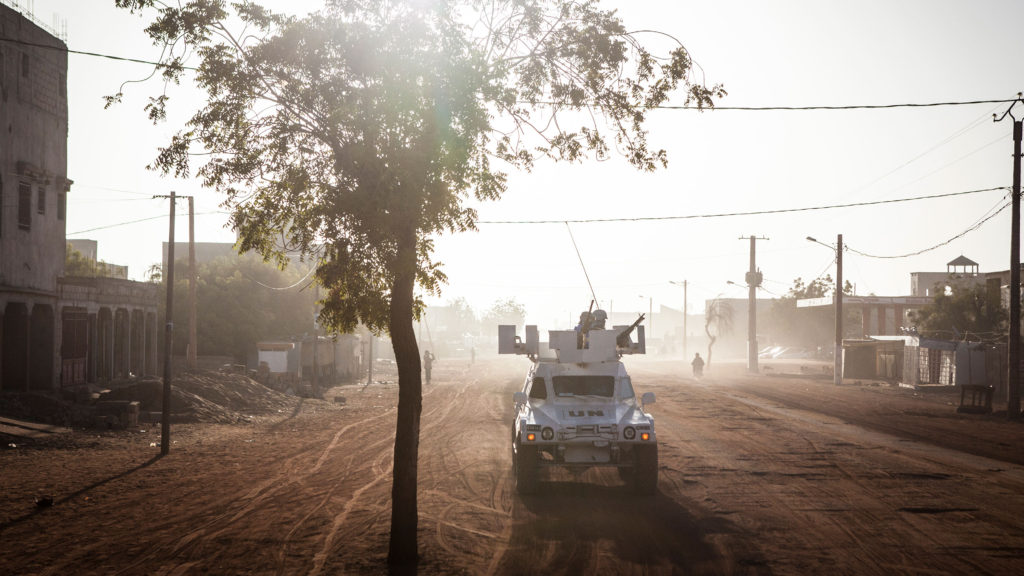 Gao, Mail- UN Peacekeepers from Senegal on an early morning patrol in Gao, Mali on Sunday, January 15, 2017. Despite the end of the occupation, many Malians find that security is still a major issue speaking of incidents of car jacking and looting. Even though crime is high, most of the deadly attacks that occur are against the United Nations Minusma mission, Malian soldiers and the French military.
(Jane Hahn for the Washington Post)

Since World War II, U.N. peacekeepers have been dispatched to 69 conflicts — civil wars, border disputes and failed states. But now they are confronting an unsettling new threat: al-Qaeda.

Here in the vast, lawless desert of northwest Africa, their convoys are being torn apart by improvised explosive devices and their compounds blasted by 1,000-pound car bombs. It is a crisis that looks more like the U.S. ground wars in Iraq and Afghanistan than the cease-fires traditionally monitored by U.N. missions.

In the past four years, 118 peacekeepers have been killed — making the U.N. mission in Mali, known as MINUSMA, the world body’s deadliest ongoing peace operation. The bloodshed has raised questions about how an institution developed in the 1940s can serve a world under threat from the Islamic State and al-Qaeda. The issue is especially potent given the expectation that U.N. peacekeepers will eventually go to places such as Syria and Libya.

“We are trying to learn these lessons here, rather than in Iraq, Libya or Syria,” said Dutch Col. Mike Kerkhove, commander of the U.N. intelligence unit in Mali. “This is not the end of this type of mission. It’s the beginning.”

In 2012, Islamist radicals linked to al-Qaeda hijacked an uprising by ethnic Tuareg people and went on to seize cities across northern Mali, holding on for nearly a year until they were forced out by a French military intervention. When 11,000 U.N. troops arrived in 2013, they were meant to protect a fledgling peace deal and train the Malian army. But Islamist extremists regrouped across the region. It did not take long before the militants started targeting peacekeepers, whom they dubbed “Crusader occupation forces.”

← CPP Investments – Making a Killing: An Evening with Richard Sanders
Is NATO heading for the Third World War? →