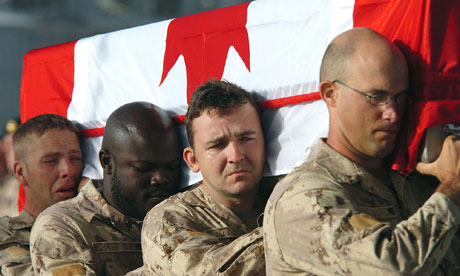 OTTAWA—The government’s plan to extend the Canadian Forces mission in Afghanistan deserves a public debate, argues a new report published by the Canadian Centre for Policy Alternatives and the Rideau Institute.

Analysts Michael Byers and Stuart Webb determine that the new training mission, first proposed by the Liberals then adopted by the Conservatives, poses many dangers to Canadian soldiers:

The report concludes that despite Prime Minister Harper’s stated intention of ensuring a “safer” mission for the Canadian Forces in Afghanistan, numerous Canadian soldiers will likely be killed or permanently injured, and the mission will ultimately not be successful.

“Although they won’t admit it, most Western governments have already given up on the country,” said co-author Michael Byers. “The training mission is clearly an exit strategy that will cost more Canadians their lives.”

The authors worry that the election has pre-empted a proper public discussion of the mission. “Canadians need to be made aware of the risks of this mission,” added co-author Stewart Webb.