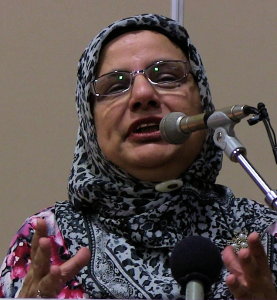 The Senate’s Conservative-dominated standing committee on national security and defence released its interim report Thursday — and it is off-the-scale ridiculous, but not surprising.

This, of course, is the committee that I was invited to present at, and was put through a McCarthy-style inquisition by Conservative senators. I was hoping for some semblance of common sense to ultimately prevail, but this report and its recommendations have proven that was too much to expect.

Almost all the report’s recommendations are redundant, discriminatory and poorly thought out.

The most fascinating is the recommendation the federal government be involved in the training and certification of imams.

This leads to all manner of questions: trained in what and by whom and certified where and with whom and for what purpose? Would this certification qualify them to lead prayers, give government-sanctioned sermons and religious instructions, adorn religious garb that meets the criteria of “Canadian imam,” or carry a government identity card deeming them “state-approved imams?”

Does the Senate think this would really gain the confidence of the Muslim community? Further, is this what we imagined a secular state to be? Is this what separation of state and church is all about?

Oh wait, we are not talking about church. This report is only about mosques. This is how the politics of fear against Canadian Muslims and their religious and community leadership has been spun — “You are either with us or against us.”

What the Conservative senators did not do is their homework. If they had first listened to Muslim mainstream leadership, they would have known that the overwhelming majority of imams regularly undergo training, have a handbook of guidelines produced by Islamic Social Services Association, and that the imams continuously and consistently teach, preach and write against violent and hateful ideology and terrorism.

No doubt a couple of imams across Canada have expressed extremist views, but they have been either isolated within the community, have been engaged by their peers to correct their views or been challenged by scholars. Further, all imams are accountable to their boards and their congregations.

So, this begs the question: why haven’t priests, rabbis and pundits been included?

The Canadian Muslim community is sophisticated enough to recognize the value of partnerships with law enforcement. In Winnipeg and nationally we have been working with RCMP, police and other stakeholders to collaboratively and co-operatively work for the common good and to protect our country and save our children from violent extremism. So in this context, the recommendation Muslims engaged in “public outreach” be subject to mandatory screening administered by CSIS is highly offensive and creates an impression Muslims cannot be trusted.

Muslim citizens needing the secret service seal of approval to do anything deemed as “public outreach?” Is this really happening in Canada?

The recommendation that people with extremist views be barred from entering Canada and that such a list be drawn up is directed only toward Muslims. Why? Particularly, when Islamophobes who have called for the extermination of Muslims are allowed to speak and rally in Canadian cities under the banner of freedom of speech. Why the double standard?

The report’s manufacturing of a “Canadian Muslim threat,” on the heels of Bill C-51, the government’s Anti-terrorism Act and C-24, the country’s new Citizenship Act, should be a wake-up call for Canadians.

By stoking fear, creating second-class citizens, undermining the value of our freedom, violating our basic rights and basing government policy on prejudice, misinformation and bigotry, we are heading down a path to repeating the history of the internment of Japanese-Canadians, except this time it will be the internment of Muslim Canadians.

Shahina Siddiqui is the president of the Islamic Social Services Association. This article was originally published on the Winnipeg Free Press print edition July 13, 2015 A9, and online here.