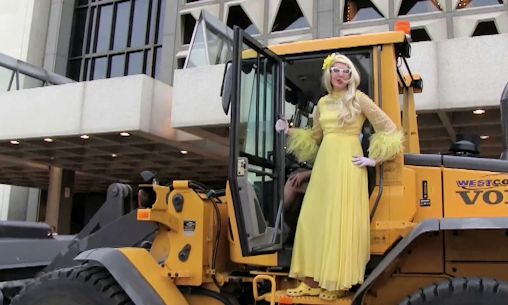 Winnipeg, May 27, 2014: “Scarlet Mowchanson” greets her adoring fans in front of the Winnipeg Concert Hall where the annual Negev Gala was being held to raise funds for the Jewish National Fund. Photo: Paul S. Graham

Activists from Independent Jewish Voices Canada staged some street theatre outside the annual Negev Gala, held May 27th at the Winnipeg Concert Hall to raise money for the Jewish National Fund.

IJV is highly critical of the JNF because of the central role it has played for decades in the theft of Palestinian land.

By announcing a “new JNF” – one dedicated to righting historic and contemporary injustices, the IJV activists hope to educate fellow Jews and other Canadians who they believe are often unaware of the discriminatory and harmful policies of the JNF.

The IJV also calls upon the federal government of Canada to remove the JNF’s charitable tax status in Canada.