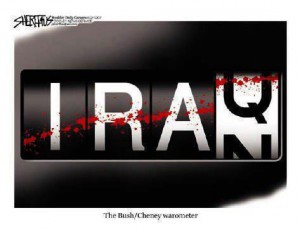 Our Gang of War Criminals

If a bunch of street toughs decided to gang up and beat the crap out of some guy in the neighborhood because they feared he might be planning to buy a gun to protect his family, I think we’d all agree that the police would be right to bust that crew and charge them with conspiracy to commit the crime of assault and battery. If they went forward with their plan and actually did attack the guy, injuring or killing him in the process, we’d also all agree they should all be charged with assault and battery, attempted murder, or even first-degree murder if he died.

In international relations and international law, the same applies. Under the Nuremberg Principles, later incorporated into the United Nations Charter, to which the United States is a signatory, the planning, preparation, initiation or waging of a war of aggression, which is defined as a war started against another nation that does not pose an imminent threat of attack on the aggressor nation or nations, is the highest of war crimes, for which the perpetrators are liable for the death penalty. Participation in a common plan or conspiracy for the accomplishment of any of those above acts is an equally serious capital crime.

How then to explain the casual way that civilian and military leaders of the US and Israel are talking openly about plans and threats to attack Iran?

The supposed casus belli or justification for such an attack is that Iran, which has a uranium enrichment program underway which it claims is to produce nuclear fuel for its new nuclear reactor (a completely legal activity for any nation under international law), secretly plans to further enrich uranium to make an atomic bomb. Yet that is a
process which, even if it were to be implemented, would not lead to an actual bomb suitable for testing for at least a year, and which would not give Iran a functioning, useable weapon for even longer. (US intelligence sources say that Iran at this point is not even trying to make a bomb!).

That alleged threat, even if it were real, doesn’t even come close to constituting an “imminent” threat of attack of the kind which might justify a pre-emptive strike on Iran, as is being publicly contemplated and threatened by the US and Israel.

The simple fact is that the president of the United States, Barack Obama, and his top generals and cabinet officers, are committing a war crime every time they threaten Iran with attack. The president is also committing a crime of conspiracy when he sends his generals to Israel, which is also committing the crime of threatening to attack Iran and planning to attack Iran. This is because by discussing options for an attack, or by providing Israel with the weapons and delivery systems it would need for such an attack, as the US is doing by sending Israel super large bunker-buster bombs and bomb-capable aircraft, they are furthering that conspiracy.

What is absolutely stunning is that this massive criminality at the highest levels of the US government is going on totally unchallenged by the US mainstream media. In an editorial on Feb. 3, the New York Times acknowledged that there was “no proof” that Iran has “made the decision to move from producing fuel to building a bomb.” Yet even so, the paper went on to warn against an Israeli and/or US attack on Iran, saying only that, “The costs of an Israeli military strike — with or without American support — would be huge,” and that it could “backfire.”