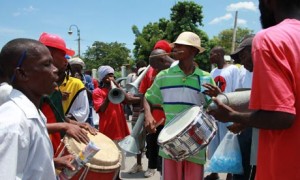 In Haiti, you’ll see a young man sitting on a crumbled wall blasting a song out of a bashed-up radio and singing along – apparently without irony – lyrics that just repeat “I love my life”. You’ll see a woman trying to peddle half-rotten papayas from a basket on her head, dancing to kompa on a pile of sewage-soaked rubble and trash. You’ll see a barefoot six-year-old boy flying a homemade kite wearing a T-shirt that says “Save Darfur”. You can be sure that if your motorcycle, car or SUV breaks down in the potholes of Port-au-Prince, any one of these folks will bend over backwards to help, rather than pose any threat to your safety.

This is encouraging news, but it begs the question: what is the world’s third-largest UN peacekeeping mission – the only one in the Americas – doing there? They have been there for over seven years with no apparent exit strategy: the UN’s blue helmets peep out of white armoured personnel carriers; Brazilian riot police patrol tent camps with weapons drawn; French gendarmes fire tear gas at peaceful demonstrators whenever they’re deemed a threat. No, the real violence of Haiti is its continuing lack of civic infrastructure, to the extent that people are dying every day of diseases to which most countries waved goodbye in the 19th century; of failed economic policies imposed from abroad like a laboratory experiment.

Two years on from the earthquake, the official death toll from cholera is now 7,000 and rising with no end in sight. In just over a year, Haiti has gone from having zero cases to having the deadliest cholera epidemic in the world. Though the outbreak was partly due to globalisation and incredibly bad luck, indications that UN troops were the source of the disease have motivated 5,000 Haitians to launch a legal action demanding an apology and compensation for “gross negligence”, and “indifference” in the UN mission’s initial response. The UN remains unapologetic, despite studies confirming the strain of cholera originated in Nepalese troops’ toilets.

← Video report: The battle for Iran
The US prepares for war with Iran →