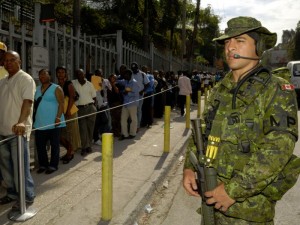 After a deadly earthquake rocked Haiti 15 months ago, most Canadians worried about uncovering those trapped, getting survivors water and connecting family members. But in the halls of power, it seems they were concerned about something very different.

According to internal documents examined by the Canadian Press this month, Canadian officials feared a post-earthquake power vacuum could lead to a “popular uprising”. Obtained through access-to-information legislation, one briefing note marked “Secret” explains, “Political fragility has increased the risks of a popular uprising, and has fed the rumour that ex-president Jean-Bertrand Aristide, currently in exile in South Africa, wants to organize a return to power.” The documents also explain the importance of strengthening the Haitian authorities ability “to contain the risks of a popular uprising.”

To police Haiti’s traumatized and suffering population 2,000 Canadian troops were deployed (alongside 10,000 American soldiers). At the same time several Heavy Urban Search and Rescue Teams in cities across the country were readied but never sent because, Foreign Affairs Minister Lawrence Cannon noted, “the government had opted to send Canadian Armed Forces instead.”

The files uncovered by the Canadian Press go to the heart (or lack thereof) of Canadian foreign-policy decision-making. Almost always strategic thinking, not compassion, motivates policy. One is hard-pressed to find an instance where compassion was more warranted than post-earthquake Haiti.

The files also tell us a great deal about Ottawa’s relationship to the hemisphere’s most impoverished nation: Canadian officials think they run the place. And they are right.

Since hosting the Jan. 2003 round-table meeting dubbed the Ottawa Initiative on Haiti, Canada has been a dominant player in Haitian life. At that meeting high level U.S., Canadian and French officials discussed overthrowing elected president Jean-Bertrand Aristide, putting the country under international trusteeship and resurrecting Haiti’s dreaded military. Thirteen months after the Ottawa Initiative meeting Aristide had been pushed out and a quasi UN trusteeship had begun.

Since that time the Haitian National Police has been heavily militarized and the winner of the recent presidential elections, Michel Martelly, plans to divert scarce state resources to re-creating the military.