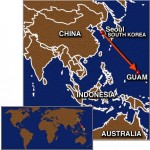 The US is building an £8 billion super military base on the Pacific island of Guam in an attempt to contain China’s military build-up.

The expansion will include a dock for a nuclear-powered aircraft carrier, a missile defence system, live-fire training sites and the expansion of the island’s airbase. It will be the largest investment in a military base in the western Pacific since the Second World War, and the biggest spend on naval infrastructure in decades.

However, Guam residents fear the build-up could hurt their ecosystem and tourism-dependent economy.