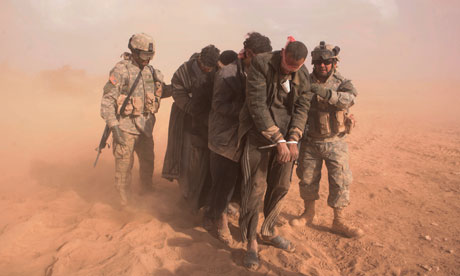 Insurgent suspects are led away by US forces. Some of those held in Iraqi custody suffered appalling abuse, the war logs reveal. Photograph: Sean Smith for the Guardian

A grim picture of the US and Britain’s legacy in Iraq has been revealed in a massive leak of American military documents that detail torture, summary executions and war crimes.

Almost 400,000 secret US army field reports have been passed to the Guardian and a number of other international media organisations via the whistleblowing website WikiLeaks.

The electronic archive is believed to emanate from the same dissident US army intelligence analyst who earlier this year is alleged to have leaked a smaller tranche of 90,000 logs chronicling bloody encounters and civilian killings in the Afghan war.

The new logs detail how:

• US authorities failed to investigate hundreds of reports of abuse, torture, rape and even murder by Iraqi police and soldiers whose conduct appears to be systematic and normally unpunished.

• A US helicopter gunship involved in a notorious Baghdad incident had previously killed Iraqi insurgents after they tried to surrender.

• More than 15,000 civilians died in previously unknown incidents. US and UK officials have insisted that no official record of civilian casualties exists but the logs record 66,081 non-combatant deaths out of a total of 109,000 fatalities.

← Malalai Joya: “this war is a disaster”
Wikileaks documents show US Iraq War resisters were right →