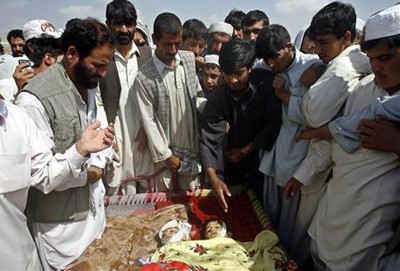 Afghans carry the bodies of two children who they say were killed by U.S-led troops in Kabul early September 1, 2008. Hundreds of protesters blocked a road in Kabul on Monday accusing U.S-led troops of killing three members of a family, including two children, in a raid in the city, residents and witnesses said. (REUTERS/Omar Sobhani)

KABUL, Sept. 1 (Xinhua) — Hundreds of citizens in Afghan capital Kabul rushed into streets and burnt tires on the Kabul-Jalalabad highway on Monday protesting against the death of a Kabuli family caused by the raid of U.S.-led Coalition forces.

The protesters said that three members of a family, two children and the father, were killed while the Coalition forces in a surprise raid early Monday morning threw grenades on their house in Hud Kheil area of eastern Kabul.

Neither NATO troops nor the Coalition forces were available to make comments immediately.

The demonstration came after a string of cases resulting civilian casualties by international troops in the past month as Afghan government’s investigating team on Sunday confirmed that 90non-combatants were killed in the U.S. air raids on Aug. 22 in the west Herat province.

Both the Coalition forces and Afghan defense ministry at the beginning disputed the claim, saying 25 insurgents and five civilians were killed during the raid.

The U.N. Assistance Mission in Afghanistan (UNAMA) after investigating the case last week confirmed the dead of 90 civilians in the bombardments and called on warring sides to respect the rights of non-combatants.

Under the escalating pressure and fury of locals, Afghan cabinet has called for regulating the authority and responsibilities of international troops in the war-torn country after the huge civilian casualties in western Herat province.

Conflicts and spiraling insurgency have claimed over 3,200 people’s lives with more than 800 civilians so far this year.

← Why soldiers rape
Obama the Warrior →