The lack of any discussion of Canadian foreign policy during this election is shocking and shameful — almost as shameful as Canada’s foreign policy itself. Take the case of Venezuela. For the past two decades the United States has been waging a war of sanctions and other dirty tricks to overthrow the democratically elected socialist governments of Hugo Chávez and Nicolás Maduro. Ever Washington’s poodle, Ottawa has joined in with disgusting enthusiasm. Liberal governments or Conservative ones — it has made no difference. 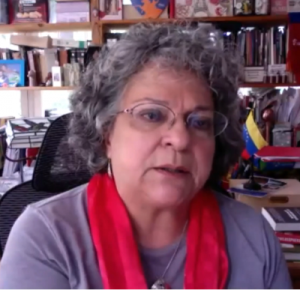 To gain a deeper understanding of Canada’s foreign policy, Peace Alliance Winnipeg (of which I am a member) has organized a series of webinars that, so far, have looked at Canada’s international mining industry, Canada’s military deployments since 1867 Canada’s policies with regard to Palestine.

Yesterday, Peace Alliance Winnipeg turned its attention to Venezuela by hosting a webinar with Venezuelan-born, Canadian scholar and activist María Páez Victor. Dr. Victor is a sociologist, educated in Caracas, New York, Mexico City, and Canada who taught the sociology of health and medicine as well as health and environmental policies at the University of Toronto for many years. Now retired from teaching, she writes and is a frequent commentator on Latin American history and politics. As well, she has her own weekly radio program about Venezuela in the Spanish language community radio of Toronto.

Here is video of the webinar.