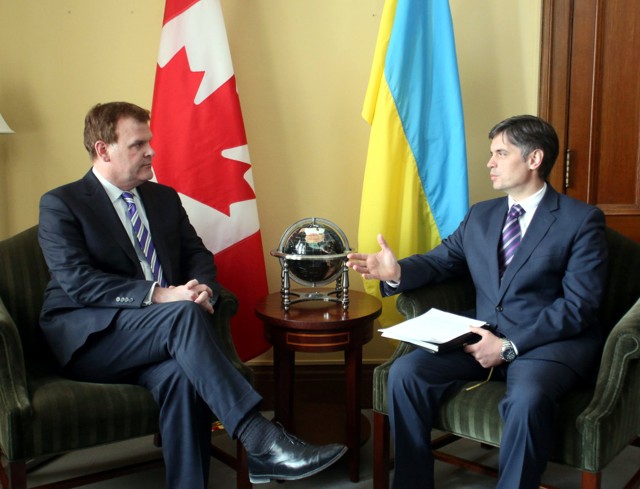 There is a need at this time to go into the facts about the crisis in the Ukraine. The simple arguments of Baird and Harper about “democracy”, “sovereignty”, “independence” are a prescription for disaster. Their treatment of the crisis is a disservice to Canadians and a manipulation of the struggle of the Ukrainian people against internal corruption and foreign domination (of both “East” and “West”).

The political, military and economic crisis which is emerging out of the conflict in the Ukraine shows the dangers of the present era. It shows that the end of the Cold War did not usher in a new and less dangerous period. Since the collapse of the Soviet Union Russia, the EU, United States and NATO have been locked in a strategic battle for control of the former republics that made up the Soviet Union and the nations that were aligned with it. In some cases, such as Poland, the issue is largely settled with control by the U.S. and NATO assured. Indeed, in response to the Russian move into the Crimea the U.S. and Poland are conducting joint air force exercises. However, in the Ukraine and elsewhere the contention is ongoing and hence the present crisis in Europe.

The crisis in the Ukraine is a continuation of the struggle that emerged in the Orange Revolution of 2004 and pitted pro-Western forces in the Ukraine against those closely tied to Russia and its interests. The collapse of socialism marked the transformation of the economy into a capitalist economy and with it the emergence of a class of oligarchs who control both the economy and politics in the Ukraine. The Orange Revolution of 2004 and the current “revolution” are largely a dispute between these powerful oligarchs and their respective backers in the EU and Russia.

The Ukrainian people are caught in a political battle between sections of the financial oligarchy for control of the Ukraine. The results of the most recent revolution do not represent a gain for the people. Yulia Tymoshenko, a key figure in the Orange Revolution, had her conviction for corruption overturned by the Ukrainian parliament following the coup and has now emerged as a spokesperson for the new government. There are other forces at work as well. On the darker side is the role played by extreme right-wing political parties and organizations in recent events.

The battles fought with police (and featured on the evening news reports in Canada) were led in large part by right wing paramilitary groups such as the ultranationalist “Right Sector.” Representatives of parties on the extreme right have taken key positions of power in the “new” and “democratic” government of the Ukraine. These developments are a dangerous current that Canada, the U.S., Britain and the EU seem content to ignore in their contention with Russia.

Western leaders are now photographed alongside ultra-nationalist Svoboda leader Oleh Tyahnybok. Last year the World Jewish Congress called on the EU to consider banning Svoboda along with Greece’s neo-fascist Golden Dawn. The new Deputy Prime Minister Oleksandr Sych is a member of the Svoboda party as is Andriy Parubiy, the Secretary of the Ukrainian National Security and Defence Council. Thus, it is a fraud for the Canadian government to suggest that the crisis in Ukraine is a battle between “democracy” and “authoritarianism.”

It is equally fraudulent for the United States, Britain and Canada to speak of concern over the “territorial integrity of the Ukraine” and the “norms of international law.” While they denounce Russia for its actions in the Crimea as unsuitable to the 21st Century and a remnant of the Cold War the fact is the U.S. and Britain have waged two wars against Iraq (one in defiance of the United Nations) and waged a war of occupation in Afghanistan. Canada, for its part, has been complicit in all these adventures. Violation of international law is a norm of big power confrontation and a consistent threat to international peace and security.

The people of the Ukraine are caught in the middle between the maneuverings of Russia and the Western powers. Neither “East” nor “West” can guarantee them peace, freedom and security so long as the objectives remain the politics of control and domination. Internally, the forces which promised neo-liberalism as the measure of democracy have failed. They have split the Ukraine along the lines of “East” and “West” and given space for the emergence of fascism and reactionary nationalism as a political force. In 2010, Viktor Yushchenko, President of the Ukraine from 2005 to 2010, and a leader of the Orange Revolution made the “nationalist” Stephan Bandera a “hero of Ukraine” despite Bandera’s collaboration with the Nazi’s and involvement in pogroms against Jews and Poles.

Canadians can take no heart in the alignment of the Canadian government with the forces that have seized power in the Ukraine or its continuing incitement of confrontation with Russia. These actions are not about support for national rights, freedom or democracy. They represent the fault lines of a new and catastrophic confrontation which is in the making. The danger reaches from Central Europe, through the former Yugoslavia, Georgia, Syria, the Middle East and Central Asia. The Ukraine is the most recent pressure point in this geo-political wrangling.

The Canadian government is fully engaged in this dangerous game through NATO and its support for U.S. and British policy to heighten these tensions. Much of the mainstream Canadian media has filtered the content of its reporting of the crisis in order to support these tensions. The danger is in accepting the narrative which is pushed – whether it is “weapons of mass destruction” as in the case of Iraq or “freedom and territorial integrity” as in the Ukraine crisis. It is important for Canadians to take a stand against this manipulation.