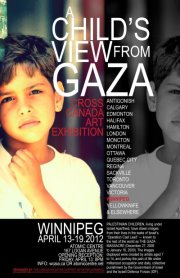 Palestinian children, living under Israeli Apartheid, have drawn images from their lives in the wake of Israel’s “Operation Cast Lead” — known to the rest of the world as THE GAZA MASSACRE (December 27, 2008 to January 18, 2009). The images displayed were created by artists aged 7 to 14, and portray the pain of life under militarized occupation and daily, collective punishment by the Government of Israel and the Israeli Defence Forces (IDF).