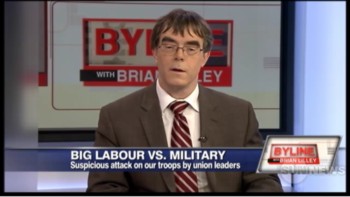 You will no doubt recall the controversy surrounding the efforts of Quebec billionaire Pierre Peladeau to get a prized licence for his Sun News TV network. If he had succeeded, the cable companies would have been obliged to carry his extremist right wing news channel, dubbed by many as “Fox News North.” In the end, the CRTC stood up to the bullying of this aggressive supporter of Stephen Harper’s Conservatives and everything Republican. They received a license – but cable companies can take it or leave it in regarding offering it to customers.

There was a huge campaign against Peladeau’s TV move by those concerned about the airways being polluted by the kind of one-sided, dishonest coverage that passed for news on Fox. Still, a lot of commentators dismissed the worries as far-fetched and alarmist.

But, while Sun TV is not, thankfully, being piped into every Canadian living room, the prediction that it would mimic Fox News is undeniable. The most recent example is the networks nasty, over-the-top attack on Steven Staples, the man who runs the Rideau Institute and its anti-war project, Ceasefire.ca.

This particular attack was prompted by a fund-raising letter sent out by ceasefire which made some very pointed and uncompromising criticisms of the arms industry lobby – namely, the Conference of Defence Associations (CDA). The CDA has gotten away with political murder for decades, casting itself as a kind of military think-tank, acting in the interests of the nation. But there is nothing neutral about this gang of arms peddlers and retired generals. Its sole purpose is to ramp up Canadian military spending and to promote the most aggressive Canadian military stance possible. When someone advises you to “follow the money” the CDA is one of the classic examples. The CDA has never seen a military procurement proposal they didn’t love – especially the proposed $30 billion purchase of F35 jet fighters (it doesn’t matter that they don’t work, have cracks in the fuselage and will be delivered years late, if ever).

What Staples said in his letter that really drove the Sun gang crazy was this: “A pro-war advocacy group made up of retired military generals, called the Conference of Defence Associations, used the bodies of soldiers killed and wounded in Afghanistan to lobby for more money.”

The CDA had appeared at a parliamentary committee hearing that was looking into ways “…to maintain social programs and deal with the country’s finances.” Into this serious discussion and debate entered the “old generals” (another phrase Fox North didn’t like) to lobby hard to keep military spending at the current astronomical levels (at $22 billion higher than at any time since WW2).

The war lobbyists shamelessly used the image of dead soldiers to back their case: “After the sacrifices made in Afghanistan and the casualties taken there because we weren’t ready, let us never again find ourselves having to rebuild essential military capabilities which we should have kept up all along.”

No mention of course, of the fact that it was their friends in the Defence Department who sent Canadian soldiers into deadly Kandahar ill-equipped and undertrained for the complex mission. But never mind the blatant opportunism and greed – Sun TV came to the rescue when Brian Lilley, one of its more aggressive program hosts, did a nine minute rant attacking Staples for his “despicable” fund-raising letter.