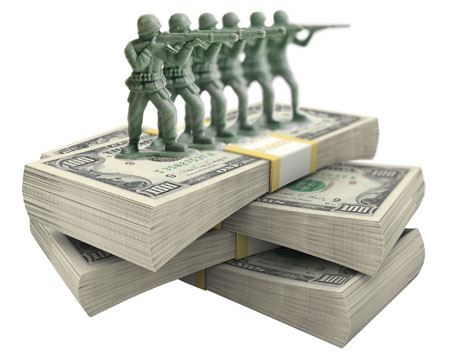 During his speech on Afghanistan June 22, President Obama revealed that “Over the last decade, we have spent a trillion dollars on war.” He knew this was a deceptive understatement, as did everyone who keeps close watch on the Bush-Obama wars all these years.

Few Americans , however, have closely followed Washington’s 21st century wars of choice, so a trillion probably sounds right to them, but that amount in 10 years — when the annual cost of air conditioning alone for the U.S. in Afghanistan and Iraq amounts to $20.2 billion a year — is way off base.

The latest objective estimate for the wars in Iraq and Afghanistan, made public June 29, is between $3.7 trillion and $4.4 trillion (140,800 years), according to the research project “Costs of War” by Brown University’s Watson Institute for International Studies.

The university assembled a team of economists, anthropologists, political scientists, legal experts, and a physician to do this analysis, which included future costs for veterans care and interest on war debts to be paid over the next few decades.

The medical costs are huge. “While we know how many U.S. soldiers have died in the wars (just over 6,000),” the report pointed out, “what is startling is what we don’t know about the levels of injury and illness in those who have returned from the wars. New disability claims continue to pour into the VA, with 550,000 just through last fall.” This doesn’t even include the thousands of deaths and injuries among quasi-military contractors. There are about as many contractors as troops in Iraq and Afghanistan.

It’s impossible to precisely predict the interest costs on these wars. In 2010, $400 billion of our tax money went toward paying off past war debts as far back as the Korean War of the early 1950s. We’ll pay war debts indefinitely because Washington is always borrowing to plan for or start new wars. So far, the U.S.-led NATO war for regime change in Libya is costing American taxpayers about a billion. The Pentagon has blueprints ready for many different kinds of future wars, from small counter-terrorism escapades, to cyberspace and outer space conflicts, to nuclear war, all the way up to World War III.

The Brown University figures may turn out to be underestimates. A few independent studies over the years have been somewhat higher but were brushed aside by the White House and the mass media. This may happen to the Brown calculations as well.

The respected Nobel Prize-winning economist Joseph Stiglitz and Harvard Professor Linda Bilmes wrote a book three years ago estimating the cost of the Iraq war only, based on data collected in 2006. It was titled “The Three Trillion Dollar War.” They based their calculations on the “hidden” costs of the war that include enormous medical care expenses over the next 50 years for tens of thousands of badly wounded soldiers, other benefits, equipment replacement, and interest on war debts.

Stiglitz and Bilmes calculated in 2008 that the combined cost of the Iraq and Afghanistan wars would be between $5 and $7 trillion. They called these adventures the “credit card wars.” Using a somewhat different methodology a few years ago, the Joint Economic Committee of Congress, estimated the Iraq war ultimately will cost $3.5 trillion. They didn’t include the Afghan war.

Assuming Obama is reelected, the Bush-Obama wars — including Iraq, Afghanistan, Pakistan, Yemen (and Somalia, where the U.S. is now engaged in drone strikes), plus the wars in Obama’s final years — will certainly top $5 trillion in real costs.

In this connection, we cannot forget that current Pentagon spending of around $700 billion a year represents a huge increase since 2001, when it totaled about $380 billion. (By comparison, during this same time period, military spending by Iran — portrayed by Washington, Tel-Aviv and Saudi Arabia as the greatest danger to peace in the Middle East — dropped from $9 billion in 2001 to $7 billion in 2010.)

But Defense Department expenses are only half the story. Double the Pentagon’s $700 billion for a true estimate of the amount of money the U.S. spent on war-related issues last year. That’s $1.4 trillion a year for the United States. How is this possible?

Instead of just discussing the Pentagon budget, it is essential to also consider Washington’s various other “national security” budgets. That of course includes the costs of Washington’s 16 different intelligence services, the percentage of the annual national debt to pay for past war expenses, Homeland Security, nuclear weapons, additional annual spending requests for Iraq and Afghan wars, military retiree pay and healthcare for vets, NASA, FBI (for its war-related military work), etc. When it’s all included it comes to $1,398 trillion for fiscal 2010, according to the War Resisters League and other sources.

It’s not enough just to take note of the money Washington spent on stalemated wars of choice. It’s fruitful to contemplate where our $5 trillion Bush-Obama war funding might have been invested instead. It could have paid for a fairly swift transition from fossil fuels to a solar-wind energy system for the entire U.S. — a prospect that will now take many decades longer, if at all, as the world gets warmer from greenhouse gases. And there probably would have been enough left to overhaul America’s decaying and outdated civil infrastructure, among other projects.

But while the big corporations, Wall Street and the wealthy are thriving, global warming and infrastructure repair have been brushed aside. States are cutting back on schools and healthcare. Counties and towns are closing summer swimming pools and public facilities. Jobs and growth are stagnant. The federal government is sharply cutting the social service budget, and Medicare et al. are nearing the chopping block.

Meanwhile, be assured that despite a bit of fixing here and there, the military and national security budgets will remain essentially unchanged.

← Israel and Palestine: What’s going on and what can we do?
Lanterns for Peace 2011 →

2 comments for “The true cost of America’s wars”