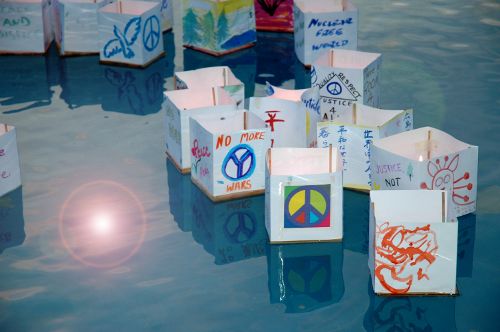 The year 2010 was a challenging one for peace activists around the world.

Locally, Peace Alliance Winnipeg was active on a number of priorities including opposition to the ongoing wars and occupations in Afghanistan, Iraq and Gaza as well as support for human rights and for the war resisters seeking refuge in Canada. Most important to our work is that the activities of the Peace Alliance Winnipeg are in co-operation with other organizations that are engaged on these issues as well.

To that end we would like acknowledge the work of: Project Peacemakers, Canadian-Palestine Support Network, Independent Jewish Voices, Students Against Israeli Apartheid, Crazy for Peace, Canada Haiti Action Network and the national and local organizations supporting war resisters. Together we have broadened the movement for peace in Winnipeg and in Manitoba.

In the spring the Peace Alliance Winnipeg participated in picket against Minister of Immigration Jason Kenny for his opposition to war resisters remaining in Canada and the overall treatment of new immigrants.

At the end of May when the Israeli Defence Forces attacked a Turkish aid ship bound for Gaza in international waters the Peace Alliance quickly responded with an action on the streets of Winnipeg.

The 29th Annual Walk for Peace took place on June 19th around the theme of “Peace, Freedom and Democracy”. The theme was chosen to reflect the fact that both within Canada and internationally these issues are major concerns facing the people. Nationally and internationally they reflect the growing movement for the people to realize these principles in reality. The Sudanese community participated in the Walk as their country moved towards an historic decision to declare independence. Also, representatives of CHAN were present as the people of Haiti struggle to reclaim their lives and country from foreign domination and occupation.

The release of “secret” diplomatic cables by Wikileaks exposed the manipulation of foreign policy by governments in Europe, the US and Canada. It showed their support for anti-democratic regimes. and the pursuit of war to serve global ambitions. Other documents exposed the maneuverings of the Abbas government against the Palestinian people in collaboration with Israel. The intrigues and conspiracies carried on by big powers were brought to light and certainly showed that peace, freedom and democracy are not on their agenda.

Within Canada opposition to the war in Afghanistan grew as did support for the Palestinian cause and war resisters who continued to face persecution. The Government, on the other hand and with the assistance of the Liberals, entrenched its opposition on these issues.

A growing concern throughout 2010 was the threat of an attack on Iran by the United States or its allies. This led a group of Winnipeggers calling themselves Crazy for Peace to spend a week in August handing out information at the Manitoba Legislature that culminated in a march through downtown Winnipeg.

Also in August Bill Siksay, NDP MP for Burnaby, accepted an invitation to attend the annual Lantern Ceremony to commemorate the use of atomic weapons on the people of Hiroshima and Nagasaki. Mr. Siksay is one of the proponents of a private members bill calling for the establishment of Department of Peace as part of the Federal Government. The 2010 Lantern Ceremony was one of the largest of recent years with over 100 participants. The ceremony also takes place in Brandon where the Brandon and District Labour Council sponsors it.

In a two hour campaign on September 25 more than 250 Winnipeggers signed our petition calling on the Canadian Parliament to withdraw all Canadian troops from Afghanistan and to “not extend the military mission in any way, shape or from including training of local forces.”

In late November PAW hosted a public meeting with anti-war and democracy activist George Galloway that was attended by more than 400 people. The Winnipeg meeting was part of a cross-Canada tour by Mr. Galloway after a Federal Court ruled that the Federal Government’s attempts to prevent his entry into Canada were unwarranted and politically motivated. The tour was a spur to the local and national peace movements. It also assisted in raising funds for the Canadian Boat to Gaza which is still on schedule to join a spring flotilla of ships destined to break the blockade of Gaza. The Galloway meeting brought new connections to the large Winnipeg Arab and Muslim community.

2010 wasn’t just about marching, house concerts in July and December, featuring performers 7th Image and Dan Frechette respectively, raised much needed funds for Peace Alliance Winnipeg – as well as raising the spirits of all who attended. Our thanks to Sandra Gessler and Garth Duncan for their enthusiasm in doing this and making the house concerts a success.

The web site also got a new, improved look and continues to be an important public image for Peace Alliance Winnipeg. Our thanks to Paul Graham who maintains the site and who also takes on providing video of Peace Alliance events.

Lastly, a word about recent events in Tunsia, Egypt and the rest of the Middle East.

This is undoubtedly important for Canadians too. Three weeks ago we stood with the Arab community as it watched the Egyptian people take their first steps in transforming their society. Canadians also rejoiced in this. After years of watching the arrogance of U.S led wars in Iraq and Afghanistan, and the zealous participation of the Canadian government in these, it was heartening to see a people’s “shock and awe” delivered to Obama, Harper, Blair – and all they represent – as the people of Tunisia, then Egypt, and now others, rise up against the dictators supported by Washington, Canada and the European Union. Those events are important to Canadians because they are factor for real change in the Middle East and real change in the Middle East will affect everyone.

← Protest in support of Libya
F-35 Stealth Fighter: A bad deal for Canada →