The International Community and Haiti a Year Later: The Failure of an Imperial Trusteeship 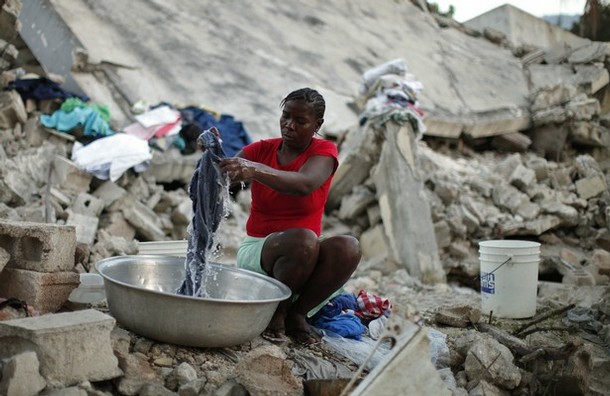 A woman washes clothes next to a house destroyed by the earthquake in Port-au-Prince January 11, 2011. Haiti will this week mark the first anniversary of the earthquake that killed around 250,000 people and wrecked much of the capital Port-au-Prince on Jan 12, 2010. Photo: Reuters/Kena Betancur

The international community responded immediately and massively to the devastating earthquake that struck Haiti on January 12, 2010 and killed more than 200,000 people, injured more than 300,000, destroyed more than 250,000 homes, 35,000 commercial, industrial, and administrative buildings, and displaced more than 1.5 million people, 1 million of whom are still living in makeshift shelters in hundreds of camps. The value of the damage has been estimated at between 7 and 14 billion dollars. Thirty-nine countries and people from countries around the world sent money and emergency aid of one sort or another, including doctors, food, medicine, water, temporary shelters, portable hospitals, road and communication repairs, and heavy equipment to remove the rubble.

The Haitian population welcomed and was grateful for the humanitarian response and gesture of international solidarity. By contrast, today Haitians are increasingly impatient, discontented, and saying “they’ve had enough” with the United Nations, the international community, and the Haitian government for the lack of progress in rebuilding the economy and the lives shattered by the earthquake. Their discontent was exacerbated even more since the outbreak of the cholera epidemic last October that has caused more than 3,000 deaths so far and is widely believed to have been introduced in Haiti by a contingent of Nepalese U.N. soldiers.

To understand the widespread popular frustration and discontent that occasionally spill over into violence, it is necessary to separate the helpful and laudable humanitarian response from the short- and long-term objectives of the international community—the United States, Canada, and France; the United Nations; and the international financial institutions (the World Bank, the International Monetary Fund, and the Inter-American Development Bank)—in the post-earthquake reconstruction of Haiti. Their objectives and their policies first and foremost aim to serve the interests of these powers and institutions for the benefit of their investors, their firms, their farmers, their manufacturers, and their non-governmental organizations (NGOs). There is a dramatic power imbalance between the international community—under Washington’s leadership—and Haiti. The former monopolizes both economic and political power and calls all the shots.

To be sure, the Haitian state and the tiny but wealthy elite who rule the country bear great responsibility for the abysmal conditions of the country—where 2 percent of the population control 26 percent of the national wealth and 76 percent live on less than $2 a day—before the earthquake. These local actors did not create these conditions alone but did so in close partnership with foreign governments and international institutions long involved in Haitian affairs, the same actors in fact who are now in charge of the post-earthquake reconstruction. It is not surprising, then, that this unequal relationship between the Haitian government and its foreign partners would be reflected in the Interim Haiti Reconstruction Commission (IHRC) whose 26 members are drawn equally from the foreign community and Haiti, and co-chaired by former US President Bill Clinton and Haitian Prime Minister Jean-Max Bellerive. The IHRC, originally conceived by the U.S.

State Department, has effectively displaced the Haitian government and is in charge of setting the priorities and objectives spelled out in the Action Plan for the Reconstruction and National Development of Haiti. Despite the appearance of equality between the two sides, however, the foreign members of the Commission make all the key decisions.

When members of the Haitian Senate pointed out to PM Bellerive that Haiti had surrendered its sovereignty to the IHRC, he readily conceded that point, but hoped that it could become “autonomous in its decisions” at some point in the future. Haitian members of the IHRC have complained in a public letter that they are being shut out of the decisions of the Commission, as did PM Bellerive who criticized the international community in an interview with the BBC for channeling aid monies to outside agencies and not allowing his government and country to play a bigger role in its own reconstruction. For their part, organizations representing wide cross-sections of Haitian society decried the fact that their voices were ignored in setting priorities for reconstruction.

So far, the IHRC has not done much. Less than 10 percent of the US$9 billion pledged by foreign donors has been delivered, though not all of that money has been spent. Other than rebuilding the international airport and clearing the principal urban arteries of rubble, no major infrastructure rebuilding—roads, ports, housing, communication—has begun. But of the approximately US$267 million doled out so far in more than 1,500 contracts, only 20 of those, worth $4.3 million, or $1.60 out of every $100, have gone to Haitian firms. The rest have gone to U.S. firms, with 23 percent going to two large U.S. firms in no-bid contracts. Most of these firms buy their goods and services almost exclusively from U.S. suppliers even when they are also available from Haitian firms. In short, although these foreign contractors employ Haitian workers mostly on a cash-for-work basis, the bulk of the money and profits go to U.S. firms and are reinvested in the U.S. rather than in Haiti where the spillover effects could spread to other sectors and promote longer-term development.

Alex Dupuy, a native of Haiti, is a professor of sociology at Wesleyan University in Conneticut and the author most recently of “The Prophet and Power: Jean-Bertrand Aristide, the International Community, and Haiti.” A shorter version of this article first appeared in the Washington Post on Friday, January 7, 2011.

January the 12th marks one year since a magnitude 7 earthquake hit Haiti killing more than 230 thousand people. One year on, many people are asking how the billions of dollars of foreign money meant for reconstruction has been spent. Al Jazeera’s Rob Reynolds reports.