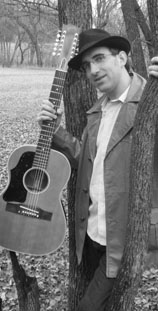 Dan Frechette is a modern traditionalist troubadour in the roots music vein. Raised on Rock n’Roll records and radio, Frechette has crafted an original catalog of over 1300 songs with styles ranging from old tyme music to rockabilly. His political folk songs “Who Will Take My Place” and “Mists of Down Below” have been sung the world over by The Duhks.

His thought provoking lyrics and emotion provoking riffs and melodies don’t stop there. Frechette is also known to many as a soulful, dynamic and engaging performer who showcases his songs on a wide variety of instrumentation. With his forays in to other styles and sounds Frechette has developed his own style and mastery on all styles of guitar, bass, banjo, mandolin, and ukulele. His harmonica playing, while simple and melodic, has become a staple of the Dan Frechette sound.

Frechette has toured internationally promoting his debut album “Lucky Day”. “My Bride and I” from the album has been recorded by famed Irish folk-rock band Dervish. His new albums “A Quick Walk With Me” and “Hitting The Hard Road Straight” feature many fine original performances with world weary and insightful lyrics with his edgy vocals at the helm. His newest album “Performer”, a live solo CD has received a 4 star rave review in the Winnipeg Free Press.