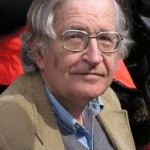 Paul Jay interviews Noam Chomsky on the expansion of post-WW 2 power and the recent signs of it’s decline: America can no longer force countries to do its bidding, as evidenced by growing independence in South America, and Turkish-Brazilian initiatives to support Iran. That said, Chomsky believes the threat of an American invasion is a real one.