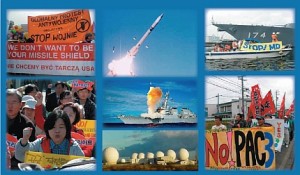 Each fall the Global Network Against Weapons & Nuclear Power in Space organizes Keep Space for Peace Week: International Days of Protest to Stop the Militarization of Space.

These events are intended to help educate the public about the need to prevent the arms race from moving into the heavens.

According to Global Network Coordinator Bruce Gagnon, “The space week protests represent the largest global grassroots expression against moving the arms race into space.  This year we are highlighting the planned Obama administration ‘missile defense’ deployments in Poland, Bulgaria, Romania, Taiwan, South Korea, and Japan that will be used to help the U.S. and NATO to militarily surround Russia and China.  These deployments, while sold as defensive measures, are in fact key elements in the creation of U.S. first-strike attack systems.  Their deployment will ensure a new arms race.”

Global Network board member Makiko Sato in Japan says, “The transformation and relocation of U.S. forces in our region has turned out to entail those of Japanese Self Defense Forces, with Patriot Missile Defense (PAC-3) systems being deployed on Japan’s soil, and with Aegis warships (outfitted with missile defense) in our waters, both aimed at the neighboring Asian countries.  To where is Japan being taken, away from and in distrust of our historical and cultural brother countries in East Asia?”

The October 2-9 actions are being co-sponsored by the Women’s International League for Peace & Freedom and the International Network for the Abolition of Foreign Military Bases.  Protests are expected at city centers and key space related factories and military bases.  Educational forums will be held and space videos would be shown throughout the week.

To see the list of Space Week protest sites or to view the 2010Space Week poster: