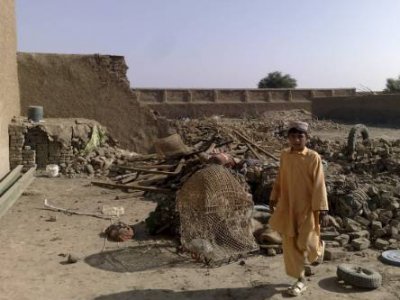 A boy stands at the site of suspected U.S. drone attacks in the Janikhel tribal area in Bannu district of North West Frontier Province, Nov. 29, 2008. U.S. forces in Afghanistan have carried out at least 27 air strikes by unmanned aircraft on militant targets in northwest Pakistan this year, according to a Reuters tally, more than half of them since the beginning of September. Source: Reuters

Re-mapping of the Muslim world is under the spotlight in the US and Pakistan’s balkanization forms a part of this agenda. American strategists are propagating the need to redraw its borders along ethnic lines by creating new political entities in the name of justice long denied to “oppressed Muslim minorities”. “Internal factors” are to be created and used, which they believe could lead to desired fragmentation. That this also reflects the mindset of the US administration can be seen by its efforts and actions to engineer grounds for military intervention, regime-change, or fragmentation in target countries.

Rising Jihadi movements, serious challenges to American hegemony, the economic meltdown in the US, declining limits of American power, and shifting of the economic epicenter to Asia all point to the emerging new political realities, wherein America stands to lose much of its power and glory by mid-century, if not sooner. This is forcing it to redefine its strategic global policy framework and pursue all options to subdue opponents and prevent its slide from power.

American strategists believe that fracturing and weakening the national unity of Islamic states could prevent militant Islam from gaining strongholds and choke their financial resources. They want oil rich territories like Kurdistan, the Eastern Arabian Peninsula, and Balochistan to be carved out, unified, and controlled by puppet regimes to secure energy resources and splinter other Muslim countries for easier micro-management. Iraq is already going through the motions and US invasion of a hostile Iran remains on the cards.