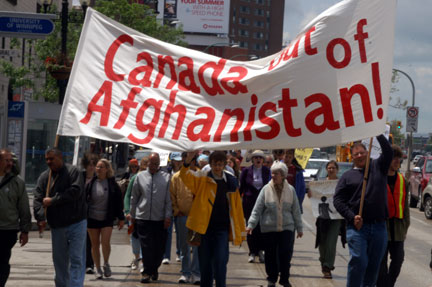 Winnipeg’s 27th Annual Walk for Peace took place on a rainy Saturday, June 14, 2008. Marchers called for the withdrawal of Canadian troops from Afghanistan and expressed their support for American war resisters who have fled to Canada, rather than participate in U.S. government war crimes in Afghanistan and Iraq.

Keynote speakers included Winnipeg North MP Judy Wasylycia-Leis, who spoke on the need to end Canada’s war in Afghanistan and Howard Davidson, who talked, from personal experience, on the importance of supporting war resisters in Canada.

After the walk, marchers enjoyed the food catered by the Sikh Society and the songs of local performer Tim Butler.