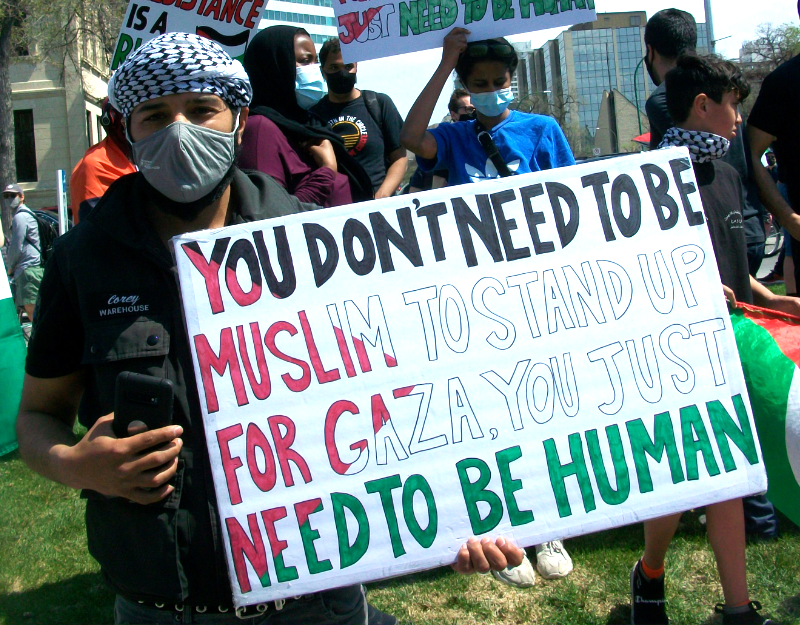 On Saturday, May 15th Israeli airstrikes hit a high rise in Gaza that housed The Associated Press and Al Jazeera offices. [AP May 15, 2021 12:21 p.m cdt] The AP has operated from that building for 15 years. The Israeli government claimed Hamas was operating from that location.

That same day marked the 73rd anniversary of the Nakba [Arabic for Catastrophe].

As of Sunday, May 16, news outlets reported that Israel has killed 42 more people. The most recent attack is considered to be Israel’s deadliest so far. [AP, May 16 11:16 a.m cdt] Israeli airstrikes also destroyed three buildings in Gaza City.

On Monday, May 17 the numbers continued to rise. According to Reuters and AP, in total 188 Palestinians have been killed so far in Israel’s attacks on Gaza, including a total of 55 children and 33 women. There have been over 1200 wounded so far.

Winnipeg was one of dozens of cities across Canada to hold a Nakba Day solidarity event on May 15, along with a protest against Israel’s current attack on Gaza.

Hundreds of Palestinians and their supporters gathered near the Manitoba Legislature for the “emergency protest for Palestine”. A Palestinian woman held up her phone to a line of police officers and demanded that they look at the images of Israel’s ongoing devastating attacks on Gaza. She then criticized the police for supporting Israel. People wore keffiyehs and chanted “Free Palestine”.

Little children, Palestine flags painted on their cheeks, walked in the sunshine. Sounds of young people chanting, “From the river to the sea, Palestine will be free”, drifted through the spring air.

Many in the crowd had family members living in Gaza.

A line of at least 50 Winnipeg Police Service officers [some dressed in riot gear] stood between Palestinians and a smaller group that had come out for a counter rally to support the State of Israel. For the majority of the time the officers stood facing the crowd of Palestinian supporters [with their backs to the group supporting Israel]. Several people pointed out to the officers that this was not fair and that an equal number of officers should be watching the Israeli supporters. None of the police officers responded to that request.

The event was originally planned as a car caravan, and once the gathering outdoors dispersed, people got into their vehicles, decorated with solidarity messages and Palestinian colours, and started driving east down Broadway to Main St.

Young men and women lined the streets in their cars, waving Palestinian flags and flashing peace signs at the crowd, thanking all the supporters in attendance.

Even though the event was intended to be a sombre occasion, there was a spirit of solidarity and revolution in the air as several new generations of Palestinians made their voices heard.

Meanwhile, as Israeli attacks continue in Gaza, Global Affairs Canada [GAC] urged de-escalation saying Israeli has a right to defend itself and live in security.

← The Palestinian Nakba: 73 years of Palestinian resistance
Statement on the murder of members of the Afzaal family →