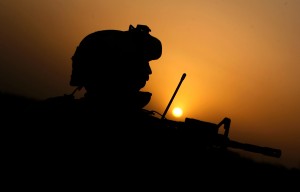 A US marine of 1/3 Marine Weapons Company is silhouetted at sunset on the northeast of Marjah on February 14, 2010. NATO commanders said the start of a major US-led offensive Operation Moshtarak (‘together’) against key Taliban stronghold Marjah in southern Afghanistan had been a success as the operation entered its second day. AFP PHOTO/PATRICK BAZ (Photo credit should read PATRICK BAZ/AFP/Getty Images)

← No Olympic Truce in Marjah