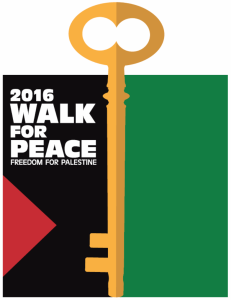 The 35th annual Winnipeg Walk for Peace takes place on Saturday, June 11, 2016. The theme chosen for this year’s march is “Freedom for Palestine.” This sponsors are Peace Alliance Winnipeg and the Winnipeg Chapter of the Council of Canadians.

Background
This year is the 35th consecutive Winnipeg Walk for Peace. For almost twice as many years, the peoples of the Middle East have been locked in a conflict that has displaced millions of Palestinians and claimed many thousands of lives. For this reason the organizers have chosen “Freedom for Palestine” as the theme of this year’s march.
For 68 years the conflict has revolved around land, nationhood, democratic rights and justice. Here are some of the injustices which underlie the issue of Palestine: