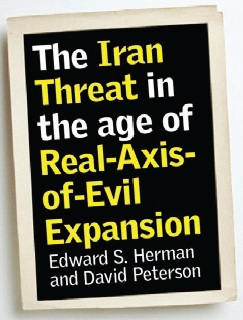 It is intriguing to see how whoever the United States and Israel find interfering with their imperial or dispossession plans is quickly demonized and becomes a threat and target for that Real-Axis-of-Evil (RAE), and hence their NATO allies and, with less intensity, much of the rest of the “international community” (IC, meaning ruling elites, not ordinary citizens). If and when the need arises, any bit of news that is damaging to the targeted state will be fed into the demonization process – and in the marvelous propaganda system of the West, the grossest distortions will be swallowed and regurgitated without much guilt or apology, even upon the exposure of exceptional gullibility and dishonesty. 2 The dishonesty, gullibility, double standard, and hypocrisy are handled with an aplomb that Pravda and Izvestia could never muster in the Soviet era.

Thus, Iran is a threat, for one thing, because it has relations with the Iraqi Shiites, has supported them in the struggle within Iraq, and may even have supplied some of their factions with training and weapons.3 Of course Iran is a neighbor of Iraq, was invaded by it in 1980, with generous U.S. help provided to then-ally Saddam Hussein, and Iran obviously has an important political stake in the outcome of any struggle for power in Iraq. But only the United States has a right to invade and fight in Iraq and provide arms to the Iraqis of its choice.