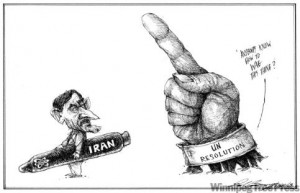 Dale Cummings’ cartoon (left) in today’s Winnipeg Free Press, illustrates the fear-mongering hypocrisy surrounding Iran’s nuclear enrichment program that is being propagated by news media and governments world-wide. If all you saw was this cartoon, you would conclude that Iran has nuclear weapons and we should all be very afraid of them.

Well, folks, Iran is not a nuclear power and the world leaders yelling loudest about Iran’s attempts to enrich uranium are more interested in taking down a country that refuses to bow to western imperialism. (And, oh, Iran has oil, lots of oil.)

While there are rogue states with nukes, Iran isn’t one of them. Those who do constitute a rogues gallery of international thugs, many of whose crimes dwarf anything Iran might be capable of.