Why is Afghanistan so important? A glance at a map and a little knowledge of the region suggest that the real reasons for Western military involvement may be largely hidden.

Afghanistan is adjacent to Middle Eastern countries that are rich in oil and natural gas. And though Afghanistan may have little petroleum itself, it borders both Iran and Turkmenistan, countries with the second and third largest natural gas reserves in the world. (Russia is first.)

Turkmenistan is the country nobody talks about. Its huge reserves of natural gas can only get to market through pipelines. Until 1991, it was part of the Soviet Union and its gas flowed only north through Soviet pipelines.

Now the Russians plan a new pipeline north. The Chinese are building a new pipeline east. The U.S. is pushing for “multiple oil and gas export routes.” High-level Russian, Chinese and American delegations visit Turkmenistan frequently to discuss energy. The U.S. even has a special envoy for Eurasian energy diplomacy.

Rivalry for pipeline routes and energy resources reflects competition for power and control in the region. Pipelines are important today in the same way that railway building was important in the 19th century. They connect trading partners and influence the regional balance of power. Afghanistan is a strategic piece of real estate in the geopolitical struggle for power and dominance in the region.

Since the 1990s, Washington has promoted a natural gas pipeline south through Afghanistan. The route would pass through Kandahar province. In 2007, Richard Boucher, U.S. assistant secretary of state, said: “One of our goals is to stabilize Afghanistan,” and to link South and Central Asia “so that energy can flow to the south.” Oil and gas have motivated U.S. involvement in the Middle East for decades. Unwittingly or willingly, Canadian forces are supporting American goals.

The proposed pipeline is called TAPI, after the initials of the four participating countries (Turkmenistan, Afghanistan, Pakistan and India). Eleven high-level planning meetings have been held during the past seven years, with Asian Development Bank sponsorship and multilateral support (including Canada’s). Construction is planned to start next year.

Why the outcome of the Afghan election doesn’t matter 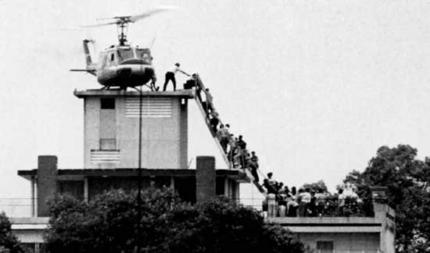 Evacuees are helped aboard an Air America helicopter perched atop the then U.S. embassy in Saigon, now called Ho Chi Minh City, in 1975. Photo: Corbis/Bettmann

The Afghan presidential election will prove to be simply irrelevant. The U.S., whose imperial hubris renders it willfully ignorant of all other cultures and societies, invaded Afghanistan with the stated purpose of eliminating Al-Qaeda (remember them — the few hundred armed followers of Osama bin what’s-his-name?).

In doing so they repeated the same blind arrogance of their imperial predecessors, the British and the Soviets. Getting in was easy; getting out on their own terms — with a credible pro-Western government in place — is proving almost impossible.

Ironically — imperialists have no sense of irony — the U.S. made their defeat in Afghanistan a virtual certainty by their previous meddling which featured the creation of the mujhideen as an anti-Soviet proxy fighting force. In doing so the U.S. elevated to political and cultural primacy the kind of oppressive and violent Islamic fundamentalism that until then had never been a dominant feature of life in Afghanistan.

In their zeal to rid the region of Soviet influence, the U.S. created in Afghanistan a country overflowing with arms and weapons where bullets rule and ballots are a joke. The U.S. has slowly awakened to the grotesque morass they have entered, and the presidential election was supposed to be key to an exit strategy it desperately needs. But this is sheer fantasy. There is no exit strategy — unless you visualize the last U.S. helicopter, with desperate Afghanis clamouring to get aboard, lifting off from the roof of the U.S. embassy. That was the eventual U.S. exit “strategy” in Viet Nam. And it may be the only one available here.