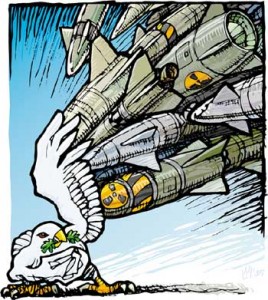 A message from AVAAZ.ORG:

The only real solution to the proliferation crisis is the elimination of all nuclear weapons worldwide. Sign the petition calling for global zero and bring a powerful democratic voice to the US-Russia summit next week.

Sign the petition
Whether in the Korean peninsula, in unstable Pakistan, or in the volatile Middle East, the risk of military or terrorist nuclear attacks is escalating daily. Yet one of the most real chances to rid the world of nuclear weapons is happening and will be won or lost far from the headlines.

Next week in Moscow, Presidents Medvedev and Obama could make history by agreeing to reduce their nuclear arsenals and set the world´s course towards a nuclear-free world. A group of highly influential figures (1) called Global Zero has presented a four-step plan to achieve that goal and, though it seems incredible, they are successfully persuading the nuclear powers that the world is more secure without nukes.

What’s needed now is a massive surge of people power urging the US and Russia to take these bold steps to achieve global zero. Click below to sign the petition and help deliver a deafening call to action. Global Zero leaders will hand it over to Presidents Obama and Medvedev:

For decades the disarmament movement has sought to rid the planet of nuclear weapons. During the Cold War, the efforts of citizens across the world played a key role in curbing the nuclear arms race, helping prevent nuclear war. But all too often their goal has been regarded as utopian and improbable.

Now, an alliance of the sound advice of security experts and the democratic force of citizens worldwide has a realistic possibility of achieving this goal.

Last April, Obama and Medvedev said they were committed to a world free of nuclear weapons. But it will require a massive concerted effort to press them to turn rhetoric into action.

In the face of a deepening crisis, the summit next week is a tremendous opportunity for human progress. Let’s pile on the pressure to seize it.

Aout AVAAZ
Avaaz.org is an independent, not-for-profit global campaigning organization that works to ensure that the views and values of the world’s people inform global decision-making. (Avaaz means “voice” in many languages.) Avaaz receives no money from governments or corporations, and is staffed by a global team based in Ottawa, London, Rio de Janeiro, New York, Buenos Aires, and Geneva. Call us at: +1 888 922 8229 or +55 21 2509 0368.