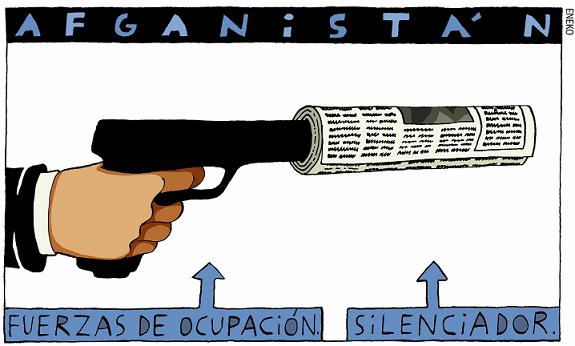 By Eneko in Diagonal Periódico

During 2009, seven out of ten civilians killed by the Obama and NATO military machines have been women and children. Clearly, the Obama regime has failed on the metric of civilian casualties.

A tacit agreement operates between the Obama administration, the U.S corporate media, most progressive U.S. liberals, and the United Nations Assistance Mission for Afghanistan (UNAMA). All dream to a lesser or greater degree of a future social democratic paradise in Afghanistan where girls’ schools would be flourishing and small farmers exporting pomegranates. Some debate exists over the means to achieve this end. Much ado has been made during the past five months as to whether the Obama approach to Afghanistan differs or not with that of its predecessor.

What is certain is that Afghanistan has become Obama’s war. Words matter: this is Obama’s war and it is a military surge. Obama has put in motion a surge of U.S occupation troops raising them by 50% to a level of 55,000 by mid-summer 2009 (including a 1,000-strong contingent of Special Forces). He is continuing and expanding Bush’s use of mercenaries. Pentagon data indicates that private security contractors working for the Pentagon have risen by 29% during the first quarter of 2009.

A debate centers upon to what degree the Obama approach is one of counter-terrorism (CT) or counter-insurgency (COIN). Central to the latter is the metric of civilian casualties and this is where the U.S media by commission and the UNAMA by omission enter the evolving Afghan tragedy. Much of the U.S left by having earlier proclaimed that the Afghanistan was the “good war” and being inebriated by the nation-building of humanitarian imperialism is now suffering from a bi-polar disorder, rendering it irrelevant.