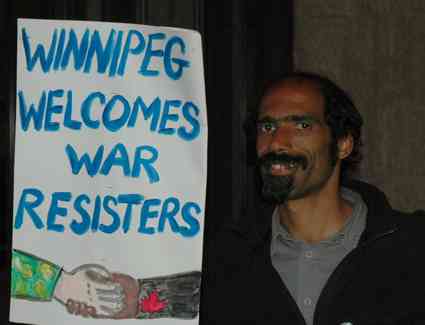 Halfway through a three-day fast, Winnipeg peace activist Michael Welch is spending his second night under the stars in support of Corey Glass and other US war resisters who have come to Canada rather than fight an immoral war. Tuesday night and part of Wednesday was spent outside the office of Tory MP Joy Smith (Kildonan-St. Paul); Wednesday afternoon and evening on the steps of the Manitoba Legislature.

Michael decided to become actively involved in supporting war resisters last month following the June 3rd vote in Parliament to urge the government to allow war resisters to remain in Canada as permanent residents. When it became evident the government would not follow the advice of Parliament, Michael decided to act, beginning with a sit-in at the office of Tory MP Steven Fletcher (Charleswood–St. James–Assiniboia). Last week he sat in at the office of Rod Bruinooge (Winnipeg South).

While his reception at Tory MP offices has been cordial (with the exception of Bruinooge’s staff, who locked him out when he went outside to speak with reporters), all three MPs continue to toe the government’s anti-war resister line.

Thankfully, the Federal Court is more sensible than the Federal Government. Following its July 4th decision to order the Immigration and Refugee Board to reconsider the failed refugee claim of Joshua Key, the court today granted Corey Glass a stay of removal. While the reasons for the decision have not been issued yet, it reinforces the positive decision in Joshua Key’s asylum case.

However War Resister Robin Long is still being held in jail in Nelson, B.C. and is threatened with deportation to the United States on Monday, July 14th. (See press release.)

July 10th actions are planned across the country to stop the deportation proceedings against Robin Long and let all the war resisters stay.

In Winnipeg, a prayer vigil is planned for noon on July 10. Join Christian Peacemaker Teams in a public prayer vigil to call on Citizenship and Immigration Minister Diane Finley to rescind U.S. war resister Corey Glass’s deportation order, and to let all war resisters stay in Canada.

Vigil at “the Leg”

From his lawn chair at the Leg, Michael is helping to organize a vigil that will be held at the Manitoba Legislature, Thursday, July 10, beginning at 8:00 PM. Keynote speakers will include Howard Davidson, a Vietnam-era war resister who has spoken eloquently on the importance of supporting those who refuse to fight wars of aggression.

While war resisters and their supporters have been able to convince the Federal Court that there are grounds to consider the refugee claims of war resisters, we are not home free. Please come out to support war resisters on July 10 and in any other way you can.

This could include writing your MP, Immigration Minister Finley, and Prime Minister Stephen Harper. You can get their addresses here.

The final words go to Michael Welch, recorded on the steps of the Manitoba Legislature, tonight.

← Prayer Vigil for War Resisters
Vigil at the Leg →